Please email your scar photo to: 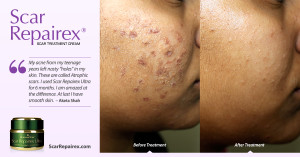 Acne is a disease of the skin that results from blockage of the sweat pores with dead cells of the skin and oil. It is also called acne vulgaris. Some other common names of acne are pimples, zits, blemishes, blackheads and whiteheads. Acne can be either mild or severe. If you have some red spots on your skin or some pimples, you have the mild form of acne. If you have numerous number of pimples all over your body, you have the severe form of acne. It is a common disease of the teens. Acne is also common in women before their menstrual periods.

Different people react differently to their pimples. Some people do not bother even when it is all over their body. Some get bothered for just a minor acne. After puberty, most people begin to experience acne. This is as a result of increase in oil in the skin caused by hormonal change during puberty. The common parts of the body affected by acne are the face, chest, neck, the back and the shoulders. Face acne, among others are more commonly infected and become very painful. Acne is usually not painful except when infected. If an acne becomes infected it forms pus.

When acne is picked or when you scrub hard on the body surfaces that has acne, it opens up and form wound. This can also occur when an acne is infected and it burst open, forming wounds.

Some people have several acne scars all over their faces, chest, shoulder, and back. These are the people who do pick on their acne always or who allow acne to get infected. Washing the skin with gentle soap twice or once daily best prevents infection of acne.

Acne does not usually require prescriptions.

Taking over the counter products to treat acne can help in acne treatment. Some of the products for acne have salicylic acid or benzozyl peroxide.

Acne can be caused by the blockage of the sweat pores by oily substances released by the skin during puberty. During puberty, there is an increase in the level of hormones in the body. Testosterone is one of the major hormones that increases in production. Skin glands produce more oil as a result of increased hormone secretion during puberty. The function of the oil released by the glands is to protect and keep the skin from dryness. The skin also sheds dead skin cells frequently. When dead skin cells mixes with oil, it blocks the sweat pores. This forms an avenue for bacteria growth. When bacteria affects the skin, it causes inflammation, redness and pus formation. There are some medications like corticosteroids or lithium that can also cause the formation of acne. Babies can also have acne as a result of the women passed to them by their mother during child birth.

Acne can either be mild or severe, appearing on the face, shoulders, chest, neck and back. It can remain there for a long time. Whitehead and blackhead are caused by acne. Pimples are also caused by acne.

Acne scars could be irritating to sight. There are so many articles about how to remove scars or treatment of scars. Those who have numerous acne scars become ashamed to expose their body surface affected by acne scars to the public. There are best Acne scar treatment that exists at places of acne treatment. There are also numerous creams containing hydrocortisone or hydroquinone for effective treatment of acne scars. Some people do not ask about how to remove scars, they just go to a nearby shop and get an over the counter best scar cream for facial scar treatment which can be used for the rest of the body. Cortisone used in the treatment of scars are absorbed by cells of the skin which reduce inflammation caused by acne.

Acne scar is not the only form of scar that exist, there are other forms of scars that remind one of a lifelong battle. They remind you of the activities you did a long time ago. It could range from surgery, resulting to surgical scar, cuts that could either be minor or major, or browses. These all leave scars. Most scars disappear with time, but some remain with you all your lifetime.

Scar Repairex® is one of the best scar treatments and has been used to treat scars like;

In the history of scar treatment, nothing has ever been compared to the Scar Repairex® creams.

The major content of over the counter scar treatment solutions are vitamin E, Vitamin C, hydroquinone, lime juice, aloe vera cucumber butter, etc. Some of these substances have been found to be irritating or carcinogenic. Little wonder why Scar Repairex® creams still remains the best.

The beneficial constituents of Scar Repairex® cream are too numerous to mention. Some of the constituents include magnesium ascorbyl phosphate, dimethicone and cyclopentasiloxane silicon base, salicylic acid, and tocopherols. Vitamins and antioxidants include; retinyl palmitate (vitamin A), sodium ascorbyl phosphate (vitamin C) camella sinesis. Proteins include; palmitonyl tetrapeptice, palmitoyl and otigopeptide. It also contains glycerides of fatty acids, allantoin, silicones, anti-inflammatory agents, salicylic acid and bromelain. All these combine in Scar Repairex® cream leading to the following functions.

The less serious scars can use the Scar Repairex® Smooth, which fades scars from minor cuts and prevent keloids.

With moderately serious scars, the Scar Repairex® Original can be used. This contains powerful combination of antioxidants which remove free radicals generated in an injury process. For the more serious scars, the Scar Repairex® Ultra can be used. This is more powerful than the others because of the higher concentrations of the best range of active composition of constituents.

Up to 60% improvement in skin appearance can be achieved within a few weeks.

Scar Repairex® creams are prescribed by over 10,000 Dermatologists an available in leading Pharmacies in over 35 countries.

Should you require any of our Doctors to look at your scar, you may email us the photo on: